As finite beings, we perceive the world around us through a range of mediators. The goal of perception is by no means to offer an accurate image of the world, but rather to help us survive, orient in space and make use of what is around us. Furthermore, neuroscientists tell us that our brains filter perception so that only a small fraction of it reaches our consciousness – that which is relevant to our goals and purposes. Even that information can be overwhelming, so in our cognitive endeavors we simplify the things we see around us, grouping them in categories based on various criteria of utility. The words we use are not descriptors of objective reality, but rather tools that help us getting from A to B.

As architects or landscape designers, we operate with even more specific categories which allow us to END_OF_DOCUMENT_TOKEN_TO_BE_REPLACED 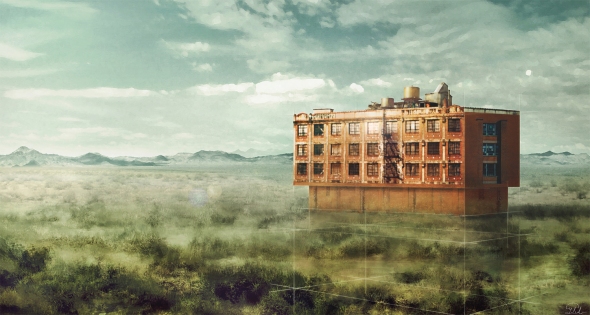 Digital Art based on Thomas Ligotti’s story, ‘The Red Tower’. You can read it online here.

“The ruined factory stood three stories high in an otherwise featureless landscape. Although somewhat imposing on its own terms, it occupied only the most unobtrusive place within the gray emptiness of its surroundings, its presence serving as a mere accent upon a desolate horizon. No road led to the factory, nor were there any traces of one that might have led to it at some time in the distant past. If there had ever been such a road it would have been rendered useless as soon as it arrived at one of the four, red-bricked sides of the factory, even in the days when the facility was in full operation. The reason for this was simple: no doors had been built into the factory, no loading docks or entranceways allowed penetration of the outer walls of the structure, which was solid brick on all four sides without even a single window below the level of the second floor. The phenomenon of a large factory so closed off from the outside world was a point of extreme fascination to me.” – Thomas Ligotti, ‘The Red Tower’.